A rather traditional application of network analysis is taking a look at conference talk on social networks such as Twitter. Right now, Burda’s DLD conference in Munich is the best research object for this purpose – especially because Twitter’s CEO Jack Dorsey is one of the speakers. I began my tracking of conference on the day before. I thought it would be rather interesting to compare pre-conference and conference chatter in terms of the volume of buzz and the most influential people or accounts. So, here’s a look at the buzz up to Saturday, the night before the official conference launch: 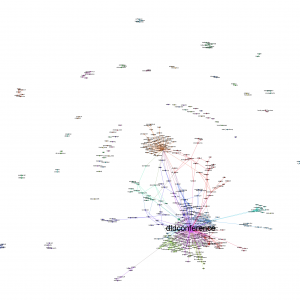 Obviously, the activity is quite limited and the official account of the conference, @DLDConference, is the most frequently mentioned Twitter account (129 times) followed by @marcelreichart (24 times) who is one of the hosts. Other people who have been mentioned more than once are @sinaafra (12), @bill_gross (7) and @yokoono (7):

If we switch the perspective from the people most frequently mentioned to the most active people, suddenly there is a quite different set of Twitter users with aninanet (60 tweets), livestream (11) and idit (10) most frequently tweeting about “#DLD12”. Here’s the information in a bit more structured format: 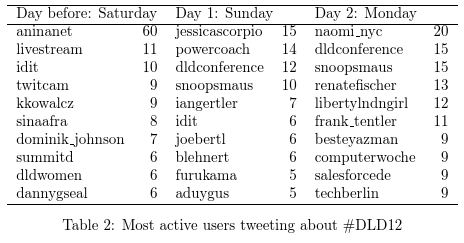 Now take a look at the next visualization that captures the Twitter activity from afternoon to midnight on the first DLD day:

The difference to the first network is striking. Now, @DLDConference has lost some influence – which is good because it’s not a good sign if the official conference account is the only one posting Tweets about a conference. And there are new people who are mentioned very frequently: @DLDConference (106 mentions), @bill_gross (84), @jack (70), @martinvars (31) and @jeffjarvis (31). The most active users were @jessicascorpio (15 tweets), @powercoach (14) and @DLDconference (12).

The size of the nodes in this visualization is the account’s page rank. The higher the page rank the higher the probability of reaching this node by chance while traveling through the network. Nodes with a high page rank have a high influence in the network. Nodes with a very high page rank were: @DLDconference, @lindastone, @hlmorgan and @bill_gross. The width of the arrows reflects the number of times one Twitter account has mentioned or retweeted another account. The strongest links were: @powercoach mentioning @jack, @burda_news mentioning @DLDConference and @mammonaetheevil mentioning @alecjross.

Finally, here’s a quick glance at the network for Monday. All DLD-related tweets from 0:00 until 16:00 have been counted and analyzed. The network is getting more and more dense. 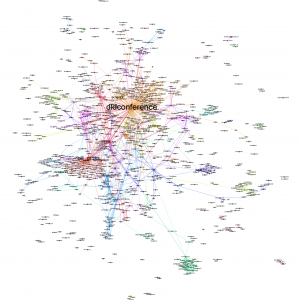 Tomorrow I’m posting another update with the remaining Monday and Tuesday tweets and I’ll take a look at the content posted by the users. Read the update in part 2 of the article.

1 thought on “Networking at the DLD conference”