One thing that’s particularly great about the Internet is the Sharing Economy. So much information, know-how, content is given out for free on a daily basis. Here’s three fascinating unpublished books that you can take a look at right now. And to make them even greater, you can always give the authors your feedback, bugs you’ve discovered or just a big thank you! 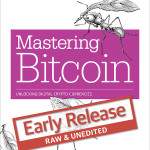 The first book from O’Reilly’s Early Release series is “Mastering Bitcoin” by Andreas Antonopoulos. If you want to learn more about how the new crypto-currency works or if you want to imagine how this concept will change the world or just understand how you can use the Bitcoin APIs to build your own tools, this is the place to start. I hope this book will give me lots of inspiration about analyzing and visualizing the Blockchain (see this blogpost).

“Deep Learning” is the somewhat humble title of the second book. This work by Yoshua Bengio, Ian J. Goodfellow and Aaron Courville (University of Montréal) on the theory and practice of neural networks a.k.a. deep learning could someday become a standard introduction. On their webpage, you can download and read the book chapter by chapter – but as this is work in progress, there could be quite a lot of updates in the future. So grab it while it is still fresh. 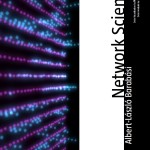 The third one is already a classic and very well received by the peer group: “Network Science” by Albert-László Barabási. This book explains the science of networks and social network analysis from the beginning (history- and concept-wise) right to the 21. century. From finding and identifying Terrorists to analyzing and optimizing organizational structure – this book abounds with colorful examples and real applications. Everyone who has been thinking “Yeah, network visualizations look pretty nice, but what’s the real use-case besides that?” should definitely take a look at this work. The best thing: it will stay free because it’s published under a Creative Commons license. Thanks, László!

The crypto-currency Bitcoin and the way it generates “trustless trust” is one of the hottest topics when it comes to technological innovations right now. The way Bitcoin transactions always backtrace the whole transaction list since the first discovered block (the Genesis block) does not only work for finance. The first startups such as Blockstream already work on ways how to use this mechanism of “trustless trust” (i.e. you can trust the system without having to trust the participants) on related fields such as corporate equity.

So you could guess that Bitcoin and especially its components the Blockchain and various Sidechains should also be among the most exciting fields for data science and visualization. For the first time, the network of financial transactions many sociologists such as Georg Simmel theorized about becomes visible. Although there are already a lot of technical papers and even some books on the topic, there isn’t much material that allows for a more hands-on approach, especially on how to generate and visualize the transaction networks.

The paper on “Bitcoin Transaction Graph Analysis” by Fleder, Kester and Pillai is especially recommended. It traces the FBI seizure of $28.5M in Bitcoin through a network analysis.

So to get you started with R and the Blockchain, here’s a few lines of code. I used the package “Rbitcoin” by Jan Gorecki.

Here’s our first example, querying the Kraken exchange for the exchange value of Bitcoin vs. EUR:

The function antiddos makes sure that you’re not overusing the Bitcoin API. A reasonable query interval should be one query every 10s.

Here’s a second example that gives you a time-series of the lastest exchange values: 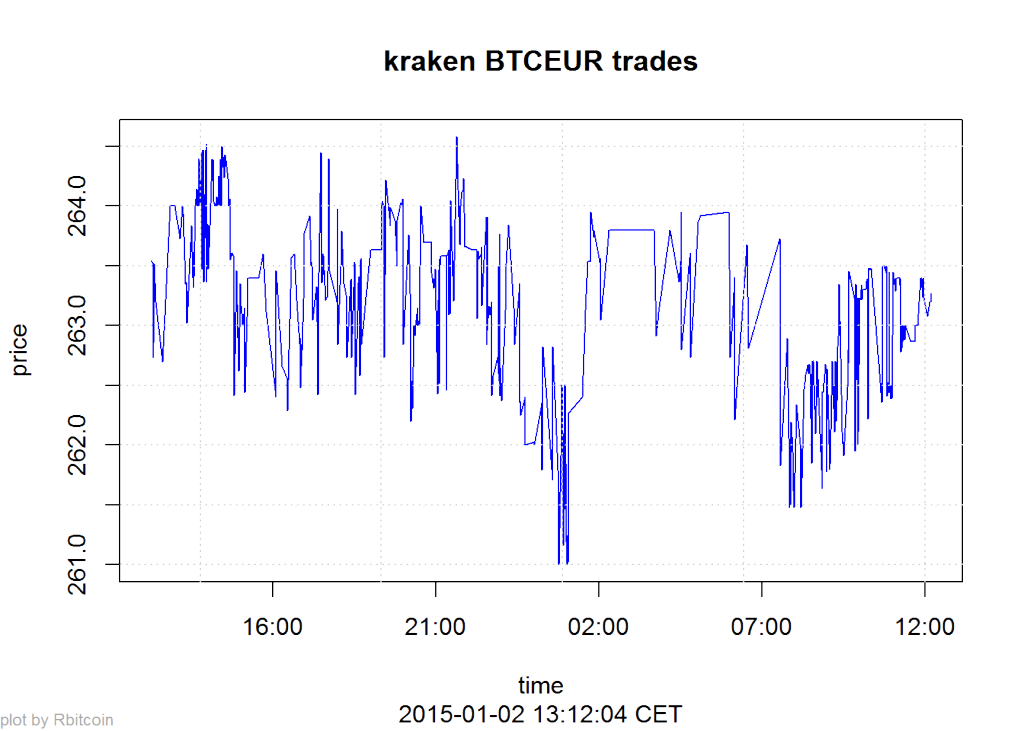 The last two examples all were based on aggregated values. But the Blockchain API allows to read every single transaction in the history of Bitcoin. Here’s a slightly longer code example on how to query historical transactions for one address and then mapping the connections between all addresses in this strand of the Blockchain. The red dot is the address we were looking at (so you can change the value to one of your own Bitcoin addresses):

Finally, we’re using igraph to calculate and draw the resulting network of transactions between addresses: 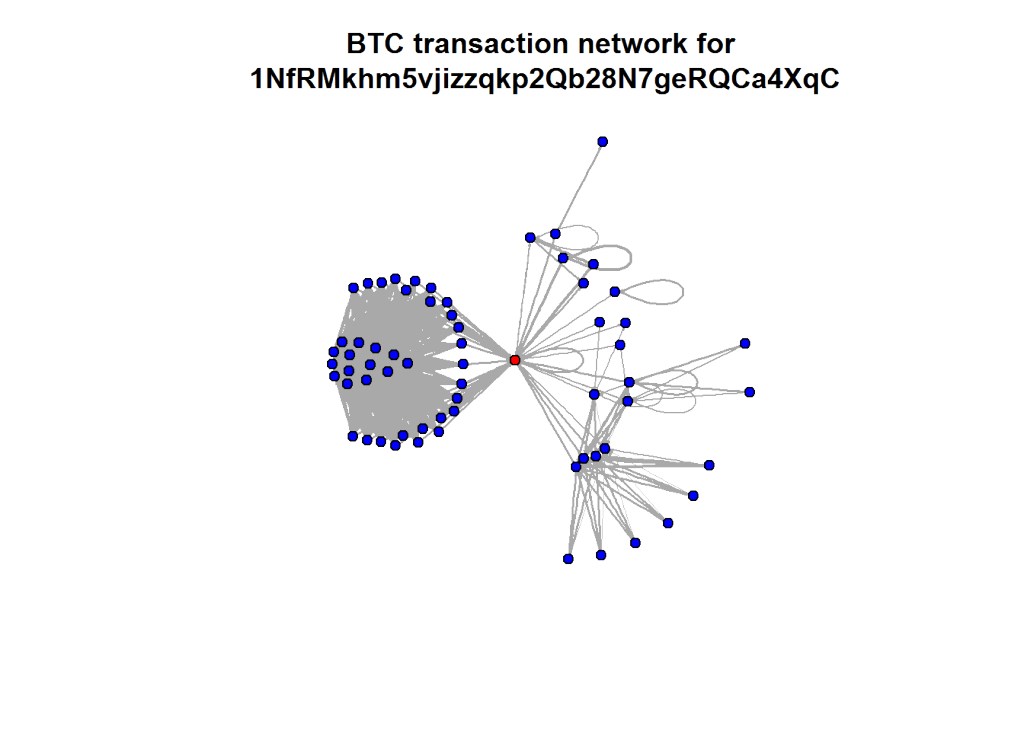